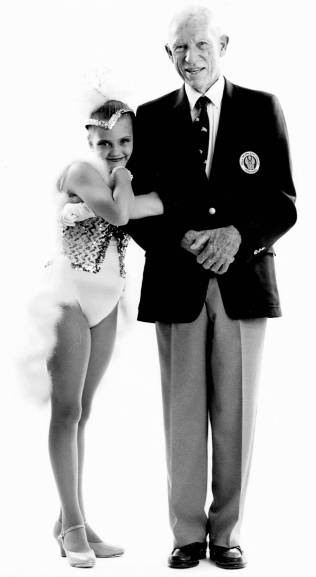 Louise and the late George Harrison, owners of The Harrison Studios, lived in Glenmoore, and worked with young people in Chester County for over sixty years.

Mr. Harrison was born and educated in Philadelphia, and upon graduation from his beloved Penn State University, where he was a Middle-Atlantic Track Champion, began his career as a Physical Education instructor with The Devereux Foundation, where he became an Executive until his retirement a few years ago. Mr. Harrison was widely known for his extensive work in sports and recreation with numerous youth groups in our community and throughout the Philadelphia Area.

Mrs. Harrison was born and raised in Chambersburg, where she attended Penn Hall Junior College before attending and graduating from Penn State University. Moving to Hawaii with her husband, she became Director of Physical Education and Recreation for the Hawaiian Islands YWCA , where she coached gymnastics and instituted a Dance Program there and at the Honolulu Maryknoll School. While in Hawaii, she operated the Kulamanu Dance Studios while doing graduate work at the University of Hawaii.

A former Eastern Regional tennis and swimming champion, she began her career of Dance and Gymnastics Training Schools upon returning to Chester County. Her thriving business today proclaims that her genuine talent for working with children has manifested itself in the creativity and directing of the largest school for professionally training children in Pennsylvania.

🧡HAPPY THANKSGIVING 🧡One day only! We’d like to extend our gratitude for the community, our dance families and the arts with this Thanksgiving day sale on Nutcracker tickets. All three performances. All rows. Cannot be held or applied to previous orders. ... See MoreSee Less